With the increase in number of people using internet instant messaging apps, websites and social networking website are trying to create more and more engaging features by which they can gain the interest of user in them. Similarly, Emoji’s are there from a long time, but from the time when Facebook and WhatsApp started playing with it, the number of people using it is also increased. WhatsApp Emoji and Facebook Emoji Symbols are mostly used around the world. We don’t think there is anyone out there who doesn’t know about emoji’s. Yes, they look cool and helps you to show your feelings in better way but have you ever thought what is the meaning of emoji symbols you are using daily?

If not, then don’t worry as we are going to tell you each and everything about emoji smiley faces meaning and what each emoji face means which you use daily on WhatsApp Messenger, Facebook, Instagram and on other services.

Just for the information and to show you the craze of Emoji around the world, let me tell you that from now there will be World Emoji Day too, which will be celebrated on July 17 each year.

This is one of the best and most popular emoji on WhatsApp, Facebook and Snapchat. The meaning of smiley symbol is to show a happy and smiling face. If you have heard good news or want to congratulate someone, then you can use this smiley emoji.

If you are feeling embarrassed with somewhat joy, then you can use this emoji to express your feelings. This WhatsApp emoji symbol is also known as Happy Sweat Emoji or the Exercise Face emoji. We don’t think you have used this emoji much because you don’t know emoji meanings of the symbols related to this emoji.

There are a lot of angry faces emoji on Facebook and WhatsApp, but the angry faces symbols mentioned here resembles to anger on someone like shouting “How dare you!” These are called as Angry Face and Pouting Face which looks directly into the eye of a person and shouting on him.

If you don’t know the meaning of Whatsapp emoji then let me tell you that this symbol is known as Straight-Faced Emoji too which can be used to show silent face to someone. If you don’t want to say anything to the person whom you are chatting with, then you can use this emoji.

Kissing Faces are another most popular emoji of Whatsapp Facebook. There are 4 kinds of kissing icon emoji and all of them have different meaning. 1st one is kissing face which is about to kiss, you will tell the meaning of second symbol as throwing heart from mouth, but its real meaning is throwing kiss to someone or flying kiss. Third and fourth are kissing with smiling eyes and kissing with closed eyes respectively.

Face With Stuck Out Tongue

If you are searching for most popular emoji symbols meaning then this emoji might be in your list too as many people use it to show some naughtiness. You can use this emoji icon whenever your sarcasm translated directly by someone. The real meaning of this emoji is to show laughter, but not the licking.

Meaning Of Emoji with Heart Eyes

If you saw something special and lovely, then you can use this heart shaped eyes emoji symbol icon to express your feelings. The emoji doesn’t really mean I LOVE YOU, but can be used to show your love for something. People use it mostly when they see photos of Pizza, as most of the people love Pizza.

This emoji is often called as Home Alone Emoji because the meaning of emoji resembles to what it looks. The face completely looks in fear of something with some sweat overhead. If you want to send a emoji icon related to brain-freeze, then also you can use this emoji symbol.

Remember those monkey symbols from Gandhi Ji? If yes, then you can get them on your WhatsApp as there are See-No-Evil Monkey, Hear-No-Evil Monkey, and Speak-No-Evil Monkey available as emoji symbol. You can use these emoji monkeys to spread message.

There are 2 kinds of devil faces available as symbols icon, Smiling Face with Horns and Imp. The first one can be used when you are thinking or doing any evil activity which doesn’t harm anyone. It is just for fun purpose. While the second one resembles to the devil activity seeking revenge.

Whenever you are into a situation where you feel like your heart is broken, then you can use this emoji to express your feelings without words. This broken heart shaped symbol is used to show extreme sorrow and sadness. 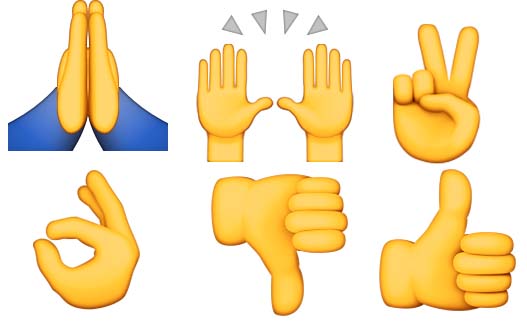 There are different kind of hand symbols emoji available, like Thumbs Down Sign (to show rejection), Thumbs Up Sign (to show approval), OK Hand Sign (to show satisfaction), Victory Hand (You can relate this emoji hand symbol with coolness, relaxation, or satisfaction.), Person Raising Both Hands In Celebration, Person With Folded Hands and many more.

There are only a few people out there who knows emoji characters meaning. Though smileys looks good and there are thousands of cute emoji’s out there which helps you in expressing your thoughts easily, but it is really important to know emoji smiley faces meaning so that next time when you are going to use WhatsApp emoji, you will know what the meaning of emoji symbols you are using is. We hope you have liked this list of emoji and their meanings and you know emoji characters meaning now. If there is any WhatsApp emoji symbol meaning or Facebook emoji meaning which we have not added, then do let us know about it in the comments section below.

How to Get the Middle Finger Emoji on Android and iPhone

How To Use Two/Multiple WhatsApp Accounts On One Device